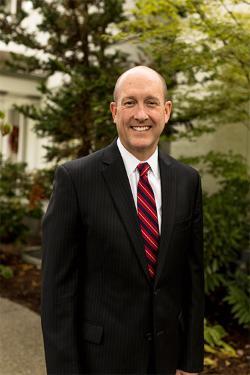 Dr. Beck A. Taylor became the 18th president of Whitworth University (Spokane, Wash.) in July 2010. He came to Whitworth after serving as dean and professor of economics for the Brock School of Business at Samford University (Birmingham, Ala.) and as associate dean for research and faculty development for the Hankamer School of Business at Baylor University (Waco, Tex.), where he was also the W.H. Smith Professor of Economics.

In his first ten years as Whitworth's president, Taylor has spearheaded Whitworth's ambitious 10-year vision and strategic plan, Whitworth 2021: Courage at the Crossroads, which details plans to continue to elevate Whitworth among the leading Christian universities in the country. Taylor's tenure at Whitworth has been highlighted by a renewed emphasis on community involvement; efforts to enhance academic programs and quality, including the creation of the College of Arts and Sciences, School of Continuing Studies, a new honors program, and enhanced graduate programs, including Whitworth's first professional doctoral programs; the building of new campus infrastructure to facilitate the university's academic, athletic, and student life programs; the creation of newly endowed faculty positions and centers; leading Whitworth's largest-ever comprehensive fundraising campaign; and an emphasis on overall institutional effectiveness. At the end of the 2019-20 academic year, Taylor became Whitworth's third-longest serving president in the university's 130-year history, eclipsed only by William Robinson (1993-2010) and Frank Warren (1940-1963).

After earning his undergraduate degree from Baylor with majors in economics and finance, Taylor was employed as an analyst for Andersen Consulting (now Accenture) in Houston, Tex. He went on to earn the M.S. and Ph.D. in economics from Purdue University (West Lafayette, Ind.). After returning to the Baylor faculty (1997-2005), Taylor received the Young Researcher Award from the Hankamer School of Business in 2000 and subsequently was named the first holder of the W.H. Smith Professorship in Economics. In 2002, he was appointed as a visiting scholar by Harvard University (Cambridge, Mass.) where he spent one year in residence at the Harvard Graduate School of Education pursuing research interests. In 2005, Taylor was named a Baylor University Outstanding Professor for his research accomplishments.

As dean of Samford's Brock School of Business (2005-2010), Taylor helped to lead a rapid transformation of the business school, including its renaming to honor Harry B. Brock, Jr., founder of Compass Bank. Taylor led the Brock School to establish eight new academic programs, as well as the school's new honors program. The Brock School's entrepreneurship program was recognized in 2010 as the nation's top emerging program by the U.S. Association for Small Business & Entrepreneurship. In an effort to build bridges between students and professionals in the business community, Taylor established the Samford Business Network, with chapters in Birmingham, Atlanta, and Nashville, and also established a 45-member advisory board of the region's top business leaders. Taylor was successful in leading the Brock School's reaccreditation by the Association to Advance Collegiate Schools of Business (AACSB) in 2010.

As a scholar, Taylor has published dozens of studies in economics journals such as Review of Economics and Statistics; Journal of Labor Economics; Journal of Human Resources; and Journal of Money, Credit, and Banking. Illustrating his diverse research interests and his connections to the social sciences, Taylor has also published groundbreaking research in public health and child developmental psychology. His research has been cited in testimony given before the U.S. Congress, the Federal Trade Commission, and the California State Assembly, and also has been referenced in publications such as The New York Times, The Boston Globe, The Christian Science Monitor, and Chief Executive Magazine. In 2012, a feature-length documentary on poverty and children in the U.S., for which Taylor was executive producer, premiered at Whitworth's Leonard A. Oakland Film Festival. His research has also been mentioned by organizations as diverse as the National Center for Children and Poverty at Columbia University, the Center for Law and Social Policy, the Center for the Advancement of Health, the National Institute for Child Health and Human Development, and the Heritage Foundation. Taylor is a popular speaker and commentator, and he appears frequently in print media and on television and radio.