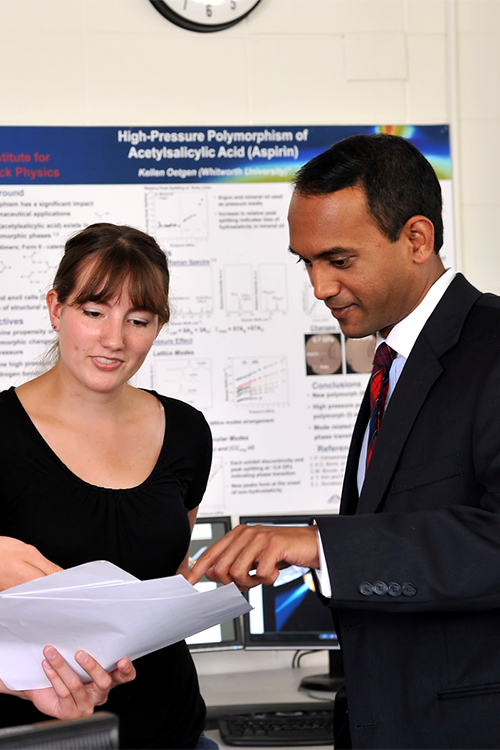 Whitworth Professor of Physics Kamesh Sankaran is known to his colleagues at NASA for his expertise in space propulsion. At Whitworth he is as known for his foundation of faith and his commitment to students as he is for his aerospace smarts.

Krister Johnson, '13, recalls visiting Whitworth as a prospective student. "Kamesh sat down with me at dinner for an hour," Johnson says. "We spoke of my interests and future plans. I was astounded to receive this sort of attention without even being an enrolled student. Once I chose Whitworth, I continued to have meals with him, until the very month I graduated." Johnson, who majored in philosophy at Whitworth, is now earning a master's in computer science at Stanford University.

Sankaran and his family hail from a town in southern India, two hours from the city of Chennai. At age 17 he received a sizable scholarship to enroll in the aerospace engineering program at the Illinois Institute of Technology. From there he went to Princeton University, where he grew intellectually and professionally, as well as spiritually.

"It was the most significant phase of my life," Sankaran says. After a fellow research student shared the gospel with him, he "decided to have an informed argument with my friend, so I bought a Bible and started reading it." Sankaran became involved in campus ministry while earning masters' degrees from the mechanical and aerospace engineering department and from the program in plasma science and technology. He completed his Ph.D. in those subjects in 2004.

That same year, Sankaran received lucrative offers to do research and to teach at universities with well-known physics and engineering programs. Rather than accept those offers, he applied to join the physics faculty at Whitworth. During the on-campus interview he fell in love with the community. "I had this sense of peace about Whitworth, that this is how God is going to work in my life and through my life," he says.

Since joining the Whitworth physics faculty, Sankaran has developed a software package for use by his collaborators at NASA and the aerospace industry to analyze and optimize the trajectory of an interplanetary spacecraft to minimize the trip time and the fuel required for the mission. He has also authored and co-authored numerous articles on spacecraft propulsion, published in scientific journals and as internal reports for NASA, and he is a reviewer for the Journal of Propulsion and Power and the IEEE Transactions on Plasma Science.

At Whitworth, Sankaran spends lunchtime with students as much as possible, and each summer he and his students conduct research for NASA; Whitworth physics students also land internships at leading research institutions across the nation. And under the tutelage of Sankaran and his physics colleagues, Whitworth's graduating physics majors enter prestigious graduate programs around the country; recent placements include Princeton, Harvard, Caltech, Carnegie Mellon, Notre Dame, UC Berkeley, UT Austin, Texas A&M, and Rensselaer Polytechnic Institute. Sankaran's teaching skills and his commitment to students have not gone unnoticed. The 2014 senior class named him the Most Influential Male Professor; he also received an Academic Mentoring Award in 2012 and the Dean's Junior Faculty Award in 2006.

"The one thing that stands out is God's goodness," Sankaran says, "the many ways I've been blessed, first and foremost, with relationships with my colleagues and my students."