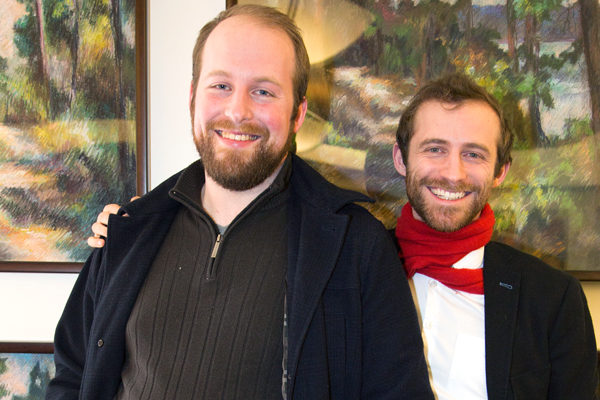 Whitworth alums Kelly McCrillis '09 and Ryan Graves '11 are filmmakers in Portland, Ore., where they are committed to creating more filmmaking in the area. They're doing just that with their soon-to-be-released feature-length film, "Emily." But first, a bit about how this cinematic duo joined forces.

"We started watching many films together and made a handful of short films on campus," Graves says. Their first short film won second place in the student competition of Whitworth's annual Leonard Oakland Film Festival. Their second short film took first place the following year.

These talented young men were on to something. After Graves graduated, the two shared an apartment in Portland, where they landed service-industry jobs downtown and began writing and producing screenplays, which they filmed in the area.

McCrillis' short film, "Off-Day," which he co-wrote and co-directed with Bill Moldt, was an official selection of the A.F.I. Film Festival and it won the Levi's: Show Us the Way film competition. Graves and McCrillis also made a short film, "Mr. Right," which Graves wrote and directed and McCrillis starred in. That film won Best Short Film Director at the Oregon Independent Film Festival, in 2014.

"After that win I was approached by a regular customer from Living Room Theaters, the theater/restaurant where I work," Graves says. "He enjoyed my short film and wanted to fund a feature film. With his investment, Kelly and I began to work on 'Emily.'"

"Emily" tells the story of a young, married couple struggling to stay together after the husband suffers a crisis of faith. Graves wrote the film based on personal experience. "I entered Whitworth as a theology major, but after taking Core 250 I had a crisis of faith and became an agnostic," he says. He decided to explore film and changed his major to English literature. After graduating, he returned to his faith and he began dating the woman who is now his wife.

"As I started writing ‘Emily' I was engaged to be married, and I constantly thought about what marriage means," Graves says. "What will happen when I change? Will she still love me when I change? Will I still love her when she changes? What if I lost my faith again? What would my devoutly faithful wife do with an agnostic or atheist husband? The movie explores those questions and their possible answers."

Graves credits McCrillis with playing a key role in clarifying and articulating the issues "Emily" explores. "Kelly and I collaborated on the plot structure, and he helped me take these very personal thoughts and hammer them into a structured story," Graves says. "From there I wrote the dialogue and scenes, and with the help of my wife the three of us polished the screenplay to its best form."

"Emily" was produced by McCrillis and directed by Graves. They shot the film over the course of a month in fall 2014; the movie was one of three featured films at the 2016 LAO Film Festival at Whitworth. Graves and McCrillis launched an Indiegogo campaign to raise funds to cover post-production costs, and they plan to release "Emily" in early 2017.

McCrillis attributes a substantial portion of his part in writing "Emily" to the influence of his Whitworth English classes. "The moral implications of the actions of our main characters stemmed mainly from classroom-inspired discourse," he says. "How students interacted in the classroom was often based upon argument and supposition. Most of the dialogue Ryan and I created for "Emily" stemmed from this form of back-and-forth speculation."

Graves says his artistic identity has been shaped by, and he learned what makes a story compelling through, his Whitworth English classes with professors Fred Johnson, Casey Andrews and Leonard Oakland. "Leonard taught me how to write film criticism and gave me a great introduction to film history," he says. "Fred elaborated on that discussion with his teaching on American film and American literature, showing me that I can learn a great deal from the Modernists and the Post-Modernists. Casey introduced me to foreign film, as well as to writers from Britain and Ireland. But I do have to credit Doug Sugano for teaching me Shakespeare, from whom every writer will always learn."

Now that "Emily" is a wrap, Graves has begun writing a script for a feature-length romantic comedy about a married couple looking for new best friends. "Making friends when you're married is hard," he says, "and the search for that perfect couple is naturally funny." Graves now works for Living Room Theaters' corporate office in the areas of marketing and editing, and he works for Proludio, a company within the corporation that provides digital theatrical playback to independent movie theaters.

McCrillis works three nights a week at a restaurant in downtown Portland, and he does freelance video production, editing and photography jobs. He is currently finishing a feature-length screenplay that he plans to pitch to a local ad company. "My hope is that they will create their own film division and expand filmmaking here in Portland," he says. "I eventually would like to work full time in film, writing, directing, and helping to get my friends' projects off the ground. And to get an owl. Because they are good writing partners."