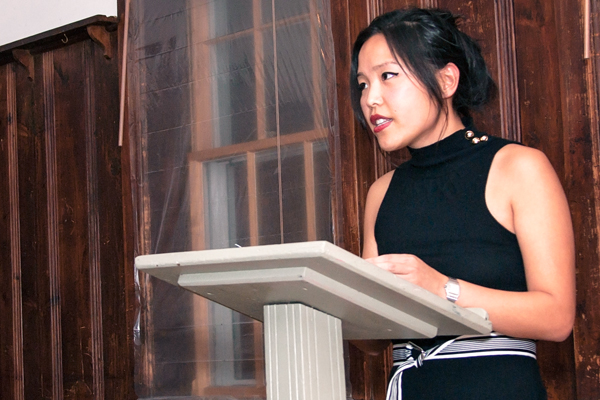 Many of Leah Silvieus' most interesting life experiences have come when she wasn't expecting them. Her openness to the unexpected has led her to embrace a diverse range of opportunities, which helps explain how she has built an impressive literary résumé while also working in the yacht hospitality industry. Silvieus '07 and her husband divide their time between Florida and New York, where they manage a yacht and two estates.

As an English major at Whitworth, Silvieus thought she would become a novelist, and she applied to study fiction at several MFA programs. But a mentor encouraged her to apply to the University of Miami in both fiction and poetry, and the program accepted her into its poetry track. "In large part, that divergence from the path I thought I would take has led me to where I am now," she says.

Silvieus credits Whitworth's Advanced Writing Workshop, which she took her senior year from Professor of English Laurie Lamon, with preparing her to work independently and as part of a workshop group at graduate school. As a Whitworth student she also participated in three academic conferences and she served as a teaching assistant for three courses, "which gave me a great foundation for teaching my own courses and workshops," she says.

Silvieus has received grants and fellowships from Fulbright, Kundiman, U.S. Poets in Mexico, and the Voices of Our Nation Arts Foundation. She has given readings, presentations, and lectures, and has led workshops at conferences and literary events in diverse locales, including Oaxaca, Mexico; Kansas City, Mo.; Madison, Conn.; and Montréal, Québec.

As a poet and interdisciplinary artist, her work has been featured at the O, Miami Poetry Festival and at the Asian American Women Artists Association, in San Francisco. Her writing has been featured in journals including Asian American Poetry & Writing, CURA, The Collagist, and diode. This spring she presented a paper on elegy and Korean adoptee poets, at the University of Virginia, and her poetry chapbook, Anemochory, is forthcoming in summer 2016 from Hyacinth Girl Press.

"For me, poetry is a means of thinking and feeling my way through the world and locating connections between seemingly disparate ideas or experiences," she says.

Reflecting on her time at Whitworth, Silvieus says her most influential experience was the network of relationships she developed while on campus. "Many of my closest relationships now are with people who have connections to Whitworth," she says. "When we get together, we frequently revisit conversations that began during our undergraduate years, including how our sense of vocation informs our art practices and our careers, as well as what it means to help build and contribute to our communities."

Silvieus' Whitworth relationships help sustain her as she continues to chart an artist's path that brims with the unexpected. "With writing, as with life in general now, I am aspiring to read, write and teach as widely as I can," she says, "while remaining receptive to whatever interesting detours (or, as they may turn out – new life directions) come my way."