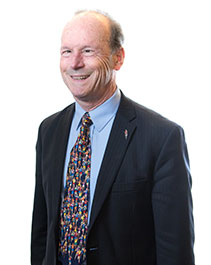 A 1968 Whitworth graduate, Ken Roberts is the chief investment strategist for Palouse Capital Management Inc., an investment advisory company. He received his MBA from Harvard University and began his investment career at Murphey-Favre in 1966. He joined Foster & Marshall in 1973, and in 1981, started the Foster & Marshall Growth Fund (now the Clearbridge ALL Cap Value Fund). After a series of mergers with Shearson/American Express and Smith Barney, Roberts left to start his own company in 1994, which was sold in 2013. He served on the board of FLOW International from 1991-2006.